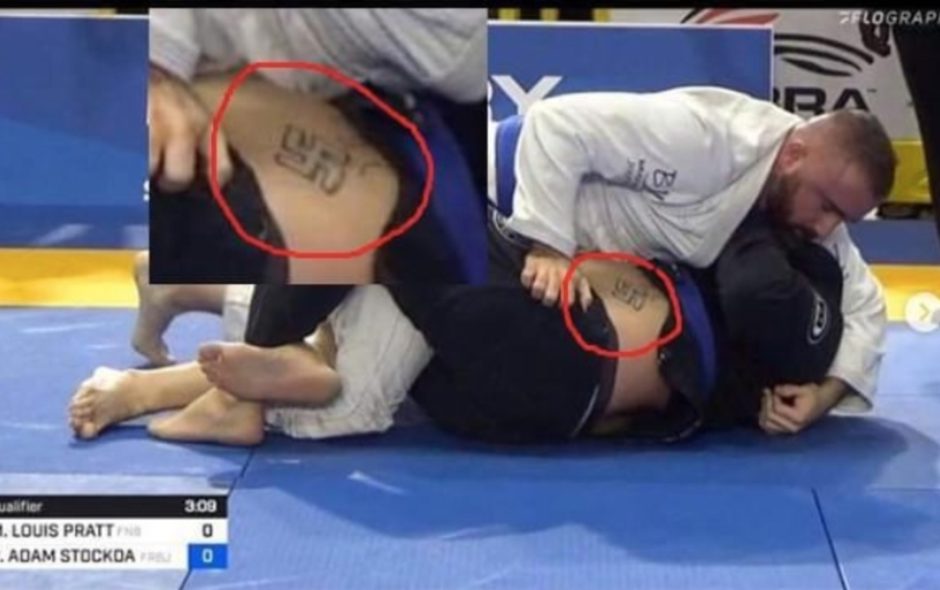 There’s an age old adage about jiu-jitsu that it is for everyone, I often disagree with this and counter that while it can be for anyone it is not for everyone…

Recently at IBJJF Pans there was a competitor whose tattoos caused a bit of a stir.  A competitor in the masters blue belt division had a Swastika (nazi symbol) tattoo visible in photos which provoked outcry from members of the jiu jitsu community.

The individual in question was a known neo nazi who was arrested in 2012.  He has several tattoos on his person including a swastika tattoos and other nazi symbols.

Several sources have reported that his coach spoke up about the outcry, stating that he is a changed man, now an ally against neo nazis.  So the question arises: what implications does having a person like this competing at the prestigious IBJJF Pans have for the sport?  Should a person like this be allowed to train?  Is jiu-jitsu REALLY for everyone?

I approach something indelible like a violent crime or belonging to a neo nazi organization as being much like any other permanent choice: you can feel for the other person but there’s no way to take their errors back.  Lines have been crossed.  And there’s a reason for my thought process.

Jiu-jitsu is an art that attracts the vulnerable because of the way it empowers them.  If a person walks into the academy where the individual in question is training and sees them and their tattoos, that may be the end of that person’s jiu-jitsu journey.  If I had to pick between having a student who is opposed to people having swastika tattoos in my academy or having people who have swastika tattoos in my academy I’d go with the prior 100% of the time.  And that is an ultimatum that is very real.

Similarly, the IBJJF is in many ways the public face of the sport.  What if this individual had won and ascended the podium?  What implications would that have for the sport of grappling in general?  What rippling effect could this person having a swastika tattoo on his neck on the podium have for the entire sport?

Now, let’s look at the other angle of this complex issue: change.  Can a person change?  Of course.  Can a person be hateful and evil but then realize they are being hateful and evil and no longer be hateful and evil?  Yes.  It has happened.  There are plenty of reformed neo nazis out there, just watch the classic film American History X, for all we know this guy could have undergone a similar experience befriending a black man in jail and in the process realizing the error of his ways.  I don’t know, I don’t know the guy.  But is he entitled to do jiu-jitsu?

I’d say the answer is mixed.  I am not his coach or the academy owner at the academy where he  trains, but if I were for the purpose of avoiding sending the wrong message to people I’d implement a policy where he has to cover his tattoos.  It’s that simple.  If a person, any person, is chased away from the sport because of his youthful indiscretions that is a bigger tragedy than the sport “losing” him.  There are ways to cover tattoos ranging from him taking a black sharpie and covering the tattoo to wearing a neck gaiter and rash guard when he rolls, or whatever, or he can get the tattoos removed (albeit expensively and painfully.)

I’d say that an individual like this is not entitled to compete in the sport, lest his presence in competition send the wrong message.  Some mistakes are unforgivable or at least unforgettable.  Having a swastika tattoo is neither, but in my mind it is a permanent indelible change to your body which makes you a danger to the sport.  Imagine if he had a body modification that made him dangerous, like steel spikes sticking out of his head or something?  These things are done by some people, and I am not one to judge, but a person with steel spikes sticking out of their head is a danger to wouldbe opponents and training partners.  The sport is, unfortunately, not for them, at least not while those steel spikes are out.

One competitor, Richie “Boogeyman” Martinez has gauged ears, this means that he has large dangling loops of flesh where his earlobes once were.  When he competes for his safety and the safety of his opponents (probably more for his safety) he tapes his earlobes up.  The concept remains the same: something that he chose to do to his body makes him unfit to compete as is so he has to slightly modify it in order to be able to compete.  The same should apply to a tattoo that if seen out of context could drive people away from the sport.

Should this individual be allowed to train?

I think that jiu-jitsu is a commodity to which not everyone is entitled.  Just because you have 2 arms and 2 legs and want to doesn’t mean you get to do it.  If you, for example, are a registered sex offender my opinion is that you should not get to learn how to hold people down and force them to submit to your will.  Sorry.  Even if you’re reformed.  Take up another sport or hobby, there are plenty of things you can do.

It is, however, up to his coach.  If he has in fact reformed he may be a valuable member of his academy.  If someone like the man in question approached me for training I’d be hesitant, but could be convinced to work with them in private.  I’d be very uncomfortable having them in my class until they get their tattoos covered up or find a way to obscure them.  And if I’m fairly certain the IBJJF has rules in place against visible tattoos featuring nazi symbols, but who knows with them… 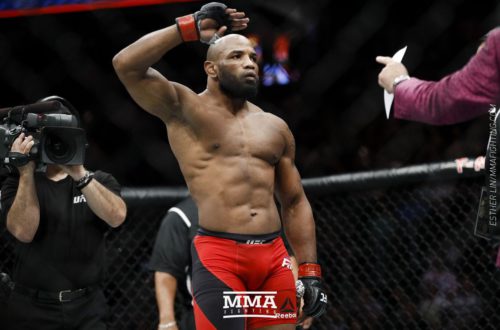 Aces BJJ News Roundup #9: F2W 158, Yoel Romero Released From The UFC and More News from Around the BJJ World
December 9, 2020 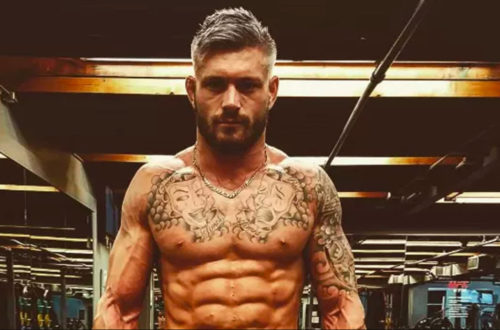 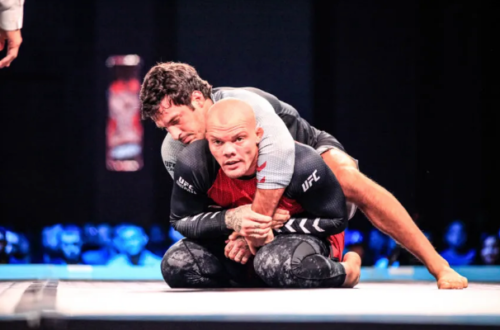